Consolidation in the Commercial Banking and Hospital Industries 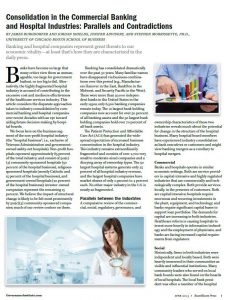 Banks have become so large that many critics view them as unmanageable, too large for government bailout, or too big to fail. Alternatively, the highly fragmented hospital industry is accused of contributing to the excessive cost and mediocre effectiveness of the healthcare services industry. This article considers the disparate approaches taken to industry consolidation by commercial banking and hospital companies over recent decades with an eye toward aiding future decision making by hospital boards.

Banking has consolidated dramatically over the past 30 years. Many familiar names have disappeared via business combinations over this period (e.g., Manufacturers Hanover in the East, BankOne in the Midwest, and Security Pacific in the West). There were more than 30,000 independent banks in the United States in the early 1930s; only 6,500 banking companies remain today. The 10 largest bank holding companies now account for over 50 percent of all banking assets and the 50 largest bank holding companies hold over 70 percent of all bank assets. The Patient Protection and Affordable Care Act (ACA) has generated the widespread expectation of increased business concentration in the hospital industry. This industry remains extraordinarily fragmented and consists of over 2,700 very small to moderate-sized companies and a dizzying array of ownership types. The 50 largest hospital systems generate only 25 percent of all hospital industry revenue, and the largest hospital companies have market shares of only 2 percent to 4 percent each. No other major industry in the U.S. is nearly as fragmented.